The lengths of the RAF operational tours

Having seen sometimes even in books written by so called aviation historians claims that the Allied fighter pilots flew only 50 operational sorties before obligatory rest period owing to their operational tour system and because of that they flew decidedly less operational sorties than their German counterparts I decided to put some info on this topic here. The limiting factor of Allied fighter pilots’ operational tour wasn’t the number of sorties flown but the amount of operational flying. In the ETO (Western Europe) only to the USAAF P-51 Mustang pilots who escorted heavy bombers the 50 operational/combat sorties for a tour was near to the truth, the P-38 Lightning pilots flying the same type of sorties were also not far off, same to the RAF, Commonwealth,  Polish etc. Mustang III/IV pilots.  P-47, P-40, Spitfire etc.  pilots had to fly substantially more operational sorties to accumulate 200 hours of operational flying and so complete his tour.

So, firstly up to the beginning of 1942 there was no official limit for an operational tour. I became aware of this when years ago I read the first part of Wing Commander R. E. Havercroft’s article ‛Armament Flight’ from May 1987 Aeroplane Monthly. At the beginning of it he described how on June 27, 1941 the Senior Medical Officer of the RAF station Biggin Hill asked from totally fatigued Havercroft “How many fighter operations have you completed, flight sergeant?” Surprised Havercroft guessed it was about 200. “Since what date?”, the MO enquired. “Since 3rd of September 1939” was the reply. “Without a rest?” the MO persisted. Hovercroft agreed that it had been continuous except for two short breaks of leave. “You are another victim of the Air Ministry’s lack of policy to rest pilots periodically from the strain of operational demands”. Hovercroft was then posted out of from his squadron to the Aircraft Gun Mounting Establishment at Duxford.

Up to early 1942 it had been up to the squadron commanding officer, the Flight Lieutenant, the squadron or the station Medical Officer to watch the possible symptoms of battle fatigue in their pilots and if noticed those to took the pilot temporarily off operations and if that wasn’t enough to cure suggest/order reposting. Or the pilot himself to ask for a rest or reposting if he felt that he could not take it anymore. But the threshold to ask a rest or reposting was high for the young men in a tightly knit combat unit and at least early in the war the appeal wasn’t necessarily accepted.

After the tour system was adopted the length of it varied, depending on period, theatre, and Command requirements of the time. Whether a man was of RAF, RAFVR, RAAF, RCAF, or RNZAF origin made no difference, nor whether he served in a RAF or a Commonwealth Squadron under RAF command or in PAF(Polish), FFAF (French) etc  squadron under RAF operational control. Tour length depended on the RAF policy of the period, the operational characters of the various Commands, and varied according to local conditions or particular Squadron needs but to the day fighter pilots in ETO (Western Europe) it was 200 hours operational flying. Flight times outside range of enemy fighters, e.g. convoy escort flights along the Yorkshire coast, without enemy contact might well be counted only as half times. And the high brass of the RAF, especially the Chief of the Air Staff air chief marshal Portal, were adamant that the RAF had the right to demand, if seen necessary, more than one operational tour from any pilot. Some uncertainty about tours for individuals remained even in 1943, with the result that Air Ministry Letter of 8 May 1943 (AIR 20/2859) was issued: Fighter Command: Day Fighters, normal maximum 200 hours.

At the end of a tour of operational duty, the intention was to “screen” crews; that is, to post them to a non-operational unit for a period of duty out of combat, with the aim of allowing them time to rest and, for many, to pass on their experience to others by a period of instructing, commonly at an OTU. It is certainly the case that aircrew found ways to extend their time on operations, either individually or together. Others were successful in dodging the intended "rest" at an OTU between first and second tour altogether. Some lucky and determined few survived three or more tours.

The ideas on which the tour length was based were: give to aircrews clear target, length should be such that usually an aircrew got through it without being overly fatigued and give an aircrew 50 - 50 chance to survive it. One must remember that service required was the first tour, then a rest period of ½ year working at an Operational Training Unit (OTU) or in a desk job, then a second tour. And as Johnnie Johnson’s experience shows, the superiors and MOs still observed pilots for signs of battle fatigue during their tour. On one day in early September 1943, when Johnnie was lying down after he had led his wing on four missions on that day his superior, Group Captain W. R. “Bill” MacBrien , entered the caravan and said: “Well, that’s it, Johnnie. Your tour is over. Godefroy takes over the wing tomorrow, so you’d better get off on some leave.” So Johnnie went to two weeks leave before taking over a desk job. In Bomber Command the tour length was exceptionally based on the number of successful combat sorties, the first tour was 30 sorties and the second 20 sorties. In late 1944 that was somewhat modified.  In Coastal Command the maximum length of a tour depended on tasks and varied from fighter, strike etc. squadrons 200 hours to flying boats and four-engine land-plane crews’ 800 hours.

Because the tour length for the Allied fighter pilots was based on operational flying time, it is difficult to find out the number of operational sorties flown by an individual without access to his logbook. But I succeeded to find info on some. All in ETO if not mentioned otherwise.

Wg Cdr William Crawford-Compton 20 or 21 victories, 800 operational hours on Spitfire, more than anyone else in Fighter Command according to Richard C. Smith.

And the relevant part of the appendix of the Air Ministry letter 17 Nov. 1944 on the subject: 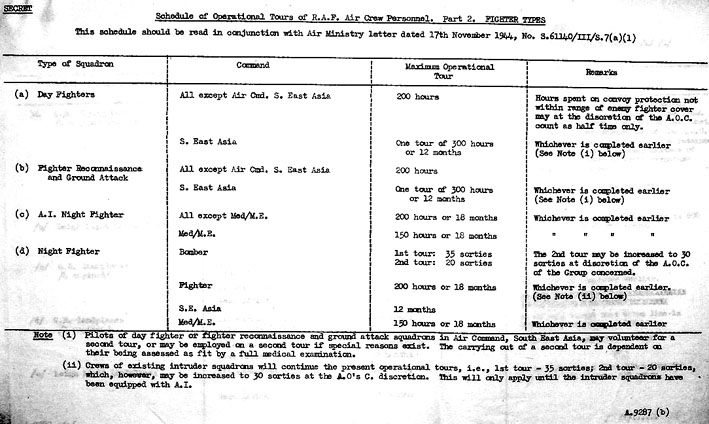 And how it was in other air forces? The following is a rough comparison. One must remember that an operational sortie is not the same as a combat sortie/mission. In the RAF roughly:
﻿Combat sortie﻿ - all flights over enemy territory + all flights when the enemy was encountered (air combat)
Operational sortie – also convoy protection flights, scrambles (without contact with enemy), patrols over own territory without enemy contact etc were included.

I have been told that Luftwaffe’s Feindflug means the same as RAF’s Combat sortie but I have seen a Luftwaffe fighter pilot’s Flugbuch (pilot’s logbook) where an Alarmstart (a scramble) without enemy contact and flown over own territory but which ended up with an emergency landing because of an engine problem was marked as a Feindflug. In a Flugbuch there was a column for the number of the flight but not for the number of a Feindflug and pilots used different ways to keep up the number of the Feindflügen, which were marked as a Feindflug in the ‛ Zweck des Fluges ‘ (Purpose of the Flight) column, some counted them in margins, some in the ‛Bemerkungen’ (comments) column, one even used the
‛Kilometer’ column for that.

Major Richard Bong 40 victories, 146 combat missions 365 hours operational flying. Because Bong flew mostly offensive sorties the figure isn’t
too far away from the number of his operational sorties if Franks used criteria identical to the British definition of a combat sortie.

At first an ETO tour for fighter pilots was 270 hours then extended to 300 hours ~ august 1944. Many volunteered for second tour. If I have understood correctly in the USAAF the second tour was voluntary. P-47 pilots obviously flew more sorties to get to 300 hours than Mustang/Lightning pilots in the 8th AF. For TAC/9th it didn't much make a difference as missions were relatively short range/heavy load.

Major Clarence "Bud" Anderson 16.25 victories, 116 combat sorties 480 hours operational flying in two tours, all in P-51.
Colonel Donald ‛Don’ Blakeslee 14,5 victories  ~500+ operational sorties 1000+ hours operational flying in Spitfire VBs, P-47s and P-51s, exact
figure impossible to know because he ‛doctored’ his log books to keep his hours down and so to stay in combat as long as possible. Blakeslee
was an exception IMHO he flew clearly more sorties than other USAAF fighter pilots in ETO.
Captain Charles ‛Chuck’ Yeager 11.5 victories, 64 missions.
Lt. Col. Bert Marshall Jr 7 victories, his first tour (all P-51) was 300 hours and 60 missions. He shot down all seven of his air to air scores in his
first 35 missions then never fired a shot after that except at ground targets. He only got in 12 more missions on his second tour which was
March/April 1945.
Major Leroy Gover 4 victories, 257 combat sorties in WWII, moved away from combat on 4 Jan 1944, flew operations in Spitfire VBs and P-47Cs.
Captain Harry R. Ankeny 3 victories, 74 combat sorties 301:30 Combat Hours, all in P-51, 12 Feb. - 16 Aug. 1944.